One wouldn’t know it based on the heat resonating from the film’s leads. Clive Owen plays “Papa” and Nicole Kidman plays Gellhorn. They meet in a Key West bar called “Sloppy Joe’s,” and their first scene together is a master class in using words as foreplay. Kaufman’s camera focuses, and not for the last time, on Kidman’s posterior, but it’s her interaction with Owen that raises the temperature. “There’s too much rum in this rum,” says Gellhorn after accepting a drink from Hemingway. “People don’t drink here to get drunk,” he says. “They drink here to stay drunk.” Gellhorn escapes with her makeup unscathed, but the seeds of desire have already been planted.

Hemingway, a seasoned vet of this type of coverage, meets Gellhorn in Spain. Clearly amused by both her inexperience and the “war correspondent” designation Gellhorn finagled out of Collier’s magazine, Hemingway takes on the role of protector and mentor. Their hotel is full of hookers and desperate men looking to cling to a warm body, and body-warming whiskey, before marching to their inevitable demise. Gellhorn meets soldiers like Brooklyn (Eric Schneider) and the goat-carrying Hungarian (Edin Gali), men whose fates contribute to pushing her passion for covering the victims of war into obsession. After risking her life to save a little boy (to whom Hemingway gives his whiskey flask), Owen looks at the camera and announces, “She’s the bravest woman I ever met!” It’s a line that’s cheesier than Wisconsin, but not out of place in a movie like this.

Hemingway’s opinion of Gellhorn swings from bravery to beauty, and the eventual consummation of their passion visually sums up the landscape of both the relationship and the movie that contains it. Gellhorn said she was the worst lay on five continents, but Kaufman and his actors have other ideas. While trying to escape the crumbling hotel during an attack, Hemingway and Gellhorn are overtaken by literally explosive passion, hungrily devouring each other as bombs shake their love nest. Kaufman, a director unafraid of adult sensuality, harkens back to the best scenes of his earlier erotic wartime feature, “The Unbearable Lightness of Being.” No strangers to nudity, Kidman and Owen live in the moment, bypassing the absurdity of the situation and pulling us hungrily along. “Is this what you want?” Gellhorn asks. “This is what I need,” growls Hemingway. The scene has a tactile quality; when an explosion sends debris raining down on the lovers, Kaufman’s framing puts his actors close enough for the viewer to reach out to brush the plaster from Kidman’s hair. It’s ripe to the point of eye-rolling. It’s also magnificent.

As Gellhorn, Kidman would appear to have an easier role to play, if only because we are not as familiar with Gellhorn as we are with Hemingway. However, this is her story, and she slings the weight of it across her shoulders and carries it to safety. This is Kidman’s best work in years, smart, brassy, funny, sexy and tough. She brings her A-game because Owen’s showier role must be legendary, a larger than life evocation of masculinity suited for the name Hemingway. Cinematographer Rogier Stoffers introduces Owen in a desaturated fishing sequence that culminates in an explosion of bright red blood. Owen’s Hemingway grabs the bull by the horns, resisting cliché just barely enough to feel the breath of caricature on his neck. His Russian Roulette pissing contest with an uncredited, equally macho and over the top Robert Duvall is a highlight of the film. Anyone with a romantic appreciation of the male gender will swoon at Owen’s constantly revealed chest hair. Everyone else can worship, as Kaufman’s camera does, at the altar of Kidman’s lower body, with its “legs that start at her shoulders.” 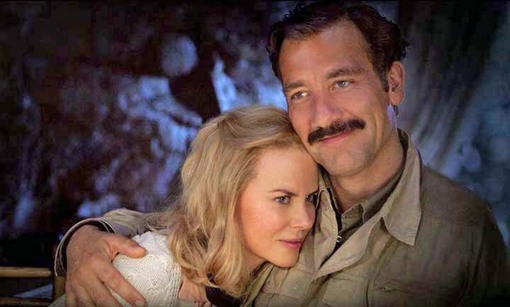 At 160 minutes, “Hemingway and Gellhorn” could afford to lose a few. But Stoffers and Kaufman know what they are doing, both combating and embracing the film’s corniness with their visual palette. This is a stunning film to watch, and to listen to, with technical masters doing bravura work. Their labors elevate and support without being so intrusive that we forget the humans at the center of this story. The special effects work and the art direction are also stand-outs. 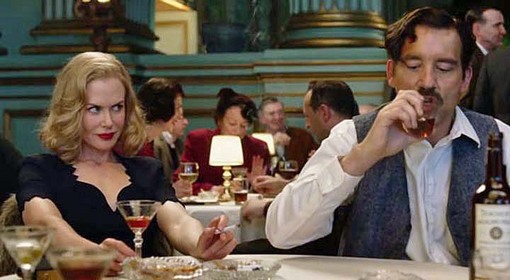 At film’s end, the narration is revealed to be an interview. The interviewer asks Gellhorn about Hemingway, whose shadow she feels she has been under even 30 years after his death by suicide. (Gellhorn would also commit suicide.) Kidman, in her old lady makeup, conjures up one last bit of fiery passion, telling the interviewer how tired she is of being in the shade behind her famous ex-husband. This film is the corrective, bringing Gellhorn into the spotlight in a style befitting the era of her original heyday. Like I said, it’s epic, old-fashioned, entertaining and corny, the kind of movie I fell in love with as a kid. Old habits die hard.

Pictured: Arthur (CLIVE OWEN) leads his men, Tristan (MADS MIKKELSEN, left), and Bors (RAY WINSTONE, back), in a scene from KING ARTHUR, directed by Antoine Fuqua and produced by Jerry Bruckheimer. FOR PRINT OUTLETS ONLY. NOT FOR INTERNET USE. Distributed by Buena Vista International. Permission is hereby granted to magazines and newspapers to reproduce this picture on condition that it is accompanied by (c) TOUCHSTONE PICTURES & JERRY BRUCKHEIMER FILMS, INC.